skip to main | skip to sidebar

Donuts? Eggs? How about years? Yep! I started this all twelve years ago today with the first picture and subsequently commenced this photo blog project! As the social media and internet landscapes have changed immensely since 2007, the platform for this project has also evolved. It started off strictly as this photo blog of course, then as Facebook and twitter made their mainstream appearances, and of course Instagram, much of the work has shifted to those media. Not that the photo blog has gone away completely yet, but for the latest, Instagram is probably the best option. To all my loyal followers across all platforms, I sincerely thank you for the support over the last 12 years and look forward to many more! 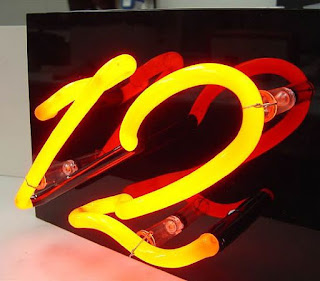 Posted by Columbus Neon at 1:31 PM No comments:

But while I am here, here are a few updates & recent postings..

Also, I have been adding neon leads with a map app on my phone with locations I want to catch and snap when I get a chance and of course, will be posted.

I hope everyone has been having a great summer!
Posted by Columbus Neon at 12:46 PM No comments:

Another year has come and gone! How does each year pass by faster and faster? It's amazing. Anyway, 2018 may not have been my most prolific in terms of shooting neon, but I did manage to grab some good ones. Hoping for a lot more activity in 2019! Here are my own personal top 5 neons take during the old year. 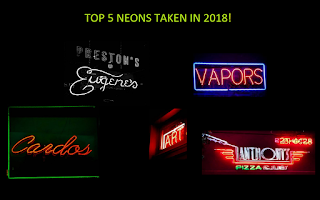 Posted by Columbus Neon at 11:12 AM No comments:

Just a friendly reminder that today, October 11, 2018, is National Sausage Pizza Day! Best places to celebrate in and around Columbus are: Stadz, Terita's, Katie's, Little Sicily, Rubino's, Vick's, among others.

Rapidly approaching is the 11th anniversary of this blog/project's beginning! Planning a big new post to celebrate so watch for updates soon!

Also, another reminder to check out my latest neon pics across social media platforms.

Keep checking back for updates and posts, not just here but the social media accounts listed above. After a warm start some real autumnal neon weather is quickly approaching. Hoping to find some good Halloween related neon out in the wilds of Columbus and beyond!

Posted by Columbus Neon at 9:20 AM No comments:

I know I don't post as much on here (in 2007, there was no Instagram, barely a Twitter or Facebook..) as I have in the past, but I still do occasionally. If you want to check out my most recent neon shtuff, check me out on various other online media:

You can also search @columbusneon on the apps for the above sites.

Here are a few of my most recent neon shots taken in and around Columbus, April & May, 2018 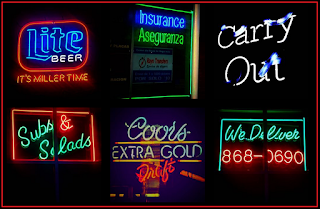 Summer is upon us so with warmer weather (but later nights) look for some new material soon! 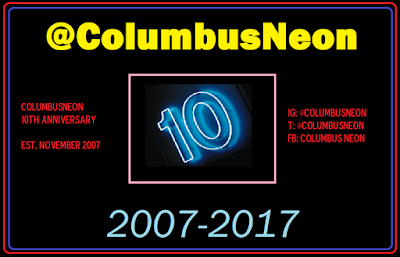 Yes, somehow, I have been doing this thing now for TEN years! It all started with this blog as a medium. Social media and smartphone were in their infancies. Many still used dial up. People still used AOL chatrooms. I had a Nokia not-so-smart but still pretty cool (for the time) phone, and a clunky digital camera. My love of neon signs as an art and advertising medium long predates November, 2007. But it was a cool gray late autumn day that year I decided to make something of it. Over the course of this project I have driven hundreds if not thousands of miles, countless snaps and edits, and learned the history of Columbus through it's retail story told through advertising and signage. I have taken some amazing photos, and some not so amazing. Each one though is a learning experience in itself.

Of course, this is no longer the golden age of neon. In fact, I started this during what has turned out to be a long decline in neon signage as an art and/or advertising medium. Late 2007 is when the economic downturn known as the "Great Recession" started. Businesses were closing up shop. Entire industries were dying or dead. Neon signs went dark en masse. Those entities that could weather and stay open from this time forward, looked for ANY cost cutting measures they could. Often, this extended to their physical presence on the street. Neon signs came down either while still 100% operational or as they started to lose their functional life. Up came the less expensive and lower power draining LED signs. While those seem like a good idea (who doesn't want to save a few bucks, even in good times?), the quality and craftsmanship are not even remotely close. Another industry and job block, that of sign manufacturers and glass blowers, was shrinking rapidly. And while companies may save a few dollars per month in electric bills by using LED, they don't realize the fact that they need more frequent replacement, usually piecemeal in fashion. The appearance, while somewhat resembling a neon, doesn't come close to the visual pop that a true neon sign can deliver. The LEDs just don't catch the eye the way neon does. While I don't have concrete evidence, I have anecdotally seen an uptick in neon usage over the last couple years. While they may cost a few more in power bills, they undoubtedly bring in more business, which means of course, more revenue and profit. Also, as far as environmental  effects, one could easily single out heating and cooling as MUCH more significant in terms of usage and effect on climate change. It's give and take. Buy an LED..save a few bucks on electric bill, but use more heat/cooling and less eyeballs on the street. Neon is an investment that pays off. That is why it was so effectively used in times of economic growth (1950s and 1980s come to mind, when neon was king).

While I lead a busy life with work, children, and many other obligations, I intend to keep this project going on. Showcasing the history and presence of this beautiful use of chemistry in the greatest city in Ohio, as well as efforts to retain and preserve our past. Onto another ten years! Now, of course, most of my posts and thoughts are on social media (though I still occasionally do post to this blog, 10 years on). Find me on Twitter: @ColumbusNeon Instagram: @columbusneon, and my Facebook page, Columbus Neon. Also check out my other photographic interests on instagram at @paulied1977. I shoot other stuff sometimes too!

Hey all..don't forget to follow/add/view me all over social media:

Hoping to do a nice big tour here soon now that the weather has dried up some. And of course fall is around the corner which is my favorite time for neoning.

Here is a bit of what I have snapped this summer: 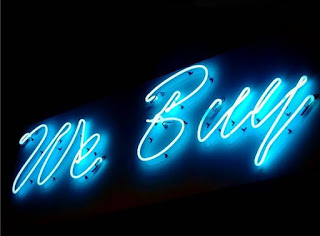 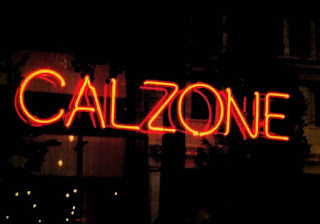 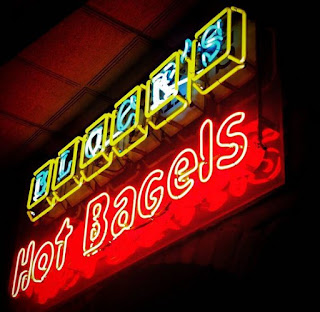 Posted by Columbus Neon at 10:08 AM No comments: